Bigger than Potter - ATLP has its Paris launch 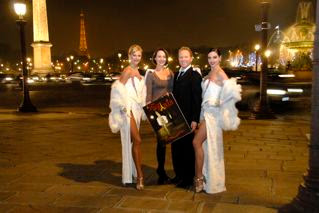 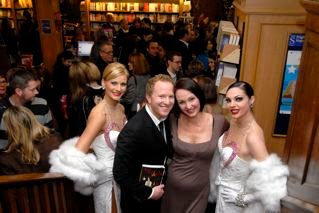 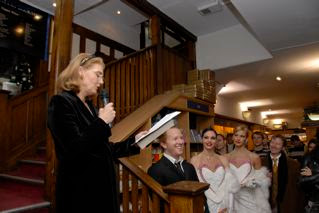 The big launch soirée was a rip roaring success, if I say so myself. With almost 200 people in attendance (the biggest turnout for a launch event that WH Smith have ever had - bigger even than for the launch of the Harry Potter books), an impressive pile of books sold (hoorah for that), Lido dancers in costume and a stirring launch speech by the Australian Ambassador to France, the book had as good a hometown launch as I could have hoped for.

My left hand is on ice after two solid hours of book signing and the large pile of empty bottles of Thompson Estate wine bear testament to the festive mood of the evening.

Highlights for me? A great speech from the Aussie Ambassador, Penelope Wensley AO (which I have copied below), a touching message from my publisher in Oz, Vanessa Radnidge (read aloud with finesse by the Showgirl), and posing for photos with the Lido girls on the Place de la Concorde.

Special thanks once again go to the serially-amazing Carla Coulson - photographer extraordinaire - for operating in sub-zero temperatures on the Place de la Concorde and coping as a forty-strong gaggle of Italian teenage tourists snapped away on their mobile phone cameras over her shoulder.

It was a memorable night - and one that finished in the wee small hours of this morning at Le Tambour - still my Parisian all-night eatery of choice.

Now I must crawl back under the duvet -- adieu.

It’s no easy task to launch your book … your ‘universe of beer’ is, well … remote from my universe of key messages, key outcomes, key figures, key indicators and …metaphoric listening at key holes! (and for those of who you who don’t get the reference, buy the book and check out p.183 in the chapter ‘all aboard the international gravy train”).

Those of you who have not yet read the book – and I do recommend it as a very readable and entertaining journey through the ups and downs of living (and loving) in the city of lights – would perhaps not realise to what extent my Paris does not really resemble your Paris. Although I, too, spent four formative years in Paris, as a single person in my early twenties, on my own journey of discovery - of France, of Paris and of myself - I was already a bureaucrat, conscious of the responsibilities of my position - and confess to feeling somewhat shocked by the gulf you describe between your ‘work experience’ and your ‘life experience’ - and your attitude to your employer and the ‘gig that paid the bills” (p.181). One suspects - indeed hopes, given your obvious talents - that despite the colourful tales and serial bagging of your employers at the ICC, between the long lunches, there was more between the lines and times when that professional ying actually did hold sway over the leisure time yang (p.181).

Yet even if we part company on some things, there are also some similarities – including coming to terms with the complexities of a new culture and mastering the language, or more accurately, the acronyms, of international bureaucracy (about which Bryce is very funny). And whilst the roads we travelled are different, we do arrive at a similar conclusion. When Bryce describes (on p.178) a yearning for Australia that is ‘more cultural craving than cultural cringe’ – as someone who has lived for considerable periods outside Australia, promoting Australia’s interests in many different countries, I can readily identify with his feelings and share the firm conviction that Australia is a fantastic place to come from, and a great place to return to.

I am here in a representative role, obviously in France generally, but specifically tonight in WH Smith, representing an Australia proud of her talented children – of which Bryce is literally one in a million – who have left Australia to seek … life, experience, opportunities that may not be available to them or are different from those available to them back home. Yet these expat Australians remain, proudly – and in Bryce’s case – loudly, Australian.

To some extent tonight, I am also representing my predecessor, Ambassador Bill Fisher, who was not only responsible for launching the popular working holiday visa at what, from all accounts, was a hell of a party, but through it, for Bryce meeting the woman he was to marry – the lovely Shay.

So on behalf of Australia (on behalf of Bill) and surrounded by Bryce’s friends (and future fans), by Bryce’s ‘babes’ and Bryce’s ‘bruisers’ (p.111), I wish a long and happy life to both the book and the bloke and herewith launch ‘A Town like Paris – living and loving in the City of Light”.