Some of you may have heard this one before. If you have, please bear with me. I think it bears repeating.

You know how the French have this amazing reputation for being the world's greatest gastronomes? You know the whole Michelin star thing is a French administered system? And you know how haughty the French can be about how superior is their cuisine compared to that of any other nation?

Well allow me to let you in on a little secret. They may talk a lot about the countless hours they spend every night, slaving over the stove to produce a meal sensation, but the truth is the entire nation is addicted to frozen food. 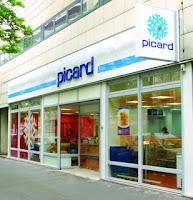 Okay, perhaps I exaggerate a little (who, moi? exaggerate? never!) -- maybe not the ENTIRE nation, but a good many of these food-obsessed Frenchies regularly eschew the fresh food markets and skulk into the frozen food emporium, Picard.

Picard is the friend of all single people. It's boil-in-the-bag, TV dinner heaven. Now, I know that in most other Western countries, TV dinners are about as apetitising as a bowl of gruel. But Picard has somehow come up with a winning formula to create GOURMET TV DINNERS.

I kid you not. Many's the time I have had guests coming for dinner and I've popped down to Picard and purchased three courses of ice-encased nosh, stuck it in the microwave or the oven and sat back and let the post-dinner compliments roll in.

In fact, when the Showgirl and I were courting (why don't people court any more? It's such a dignified practice -- everyone's so busy trying to bed one another, no one has time to court anymore --- but I digress ..) .. where was I?" Oh yeah - when the Showgirl and I were courting, I would invite her over to my place and present a gourmet meal. She used to think I was a god in the kitchen until she discovered my little frozen secret. At first, she was unconvinced about the whole "do your weekly shopping in a store full of freezers" concept. But now she's a convert. Not least because when you have an 11-month old, every second not spent looking after your child or otherwise performing household tasks such as cooking, is time you could be spending in bed. Asleep, people, asleep.

So - Picard. There it is. The great, dark, shameful secret lurking at the back of every Parisian's freezer.
Posted by Bryce Corbett at 10:18 PM 2 comments:

One of my bi-weekly joys is wandering down the rue to the fresh food market on the Boulevard Richard Lenoir.

Held every Tuesday and Friday, they are a bustling, noisy, colourful affirmation of life. The produce is fresh, the cheeses are ripe, the fishmongers are bawdy and the vendors are vocal. 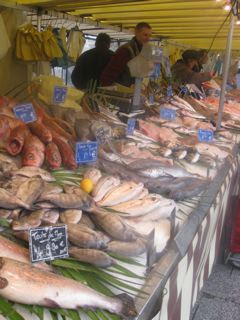 And while living in France has largely desensitized me to butcher window displays of chickens with their heads attached and skinned rabbits with their eyes intact, there's one stall at the market that never fails to gross me out.

More than one of the charcutiers sell pork - in all its many variations. There's pork belly, pork roast, pork chops and more pork lard than you can poke a hardened artery at. And for the truly adventurous, there are pigs trotters (feet) and - wait for it - pig's ears and pig's snouts. 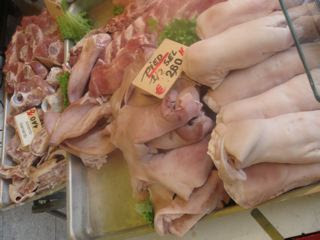 And not just plain old pig's ears, mind you. Some are even coated in a kind of aspic (what's the old saying about silk purses and sow's ears?)

I can't begin to imagine how you prepare a pig's ear or a pig's snout for eating. Do you lightly sauté them? Boil the living crap out of them? Or hurl them straight into the dog's bowl where surely they belong?

And no, this is not an invitation to email through your favourite offal recipes. As adventurous as I like to believe my palate is, I'm happy to stay in the dark on this one.
Posted by Bryce Corbett at 11:48 PM No comments:

Since the publication of A Town Like Paris, I receive emails almost daily from readers. The feedback is generally positive (phew) and the wishes are almost invariably warm. So let me say a big, fat, public thank you to everyone who has taken the time to write. 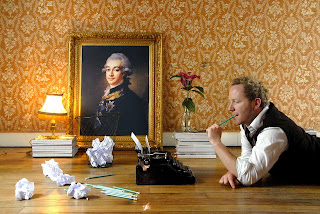 Many of you have enquired after the Love Pad - eager to wrap your peepers around this famed den of seduction and iniquity. How, I am repeatedly asked, could an apartment really exist with orange-fabric covered walls.

And so, it is with great pleasure, that I present to you, gentle readers, a few photos from inside the Love Pad. 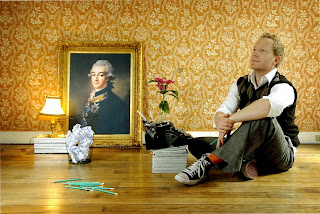 These are a couple of shots of me in the Love Pad, taken recently by my great friend, and photographer extraordinaire, Carla Coulson.

See - I told you. Orange walls. Stranger than fiction ...
Posted by Bryce Corbett at 11:34 PM No comments:

Reason No.538 you've got to love the French 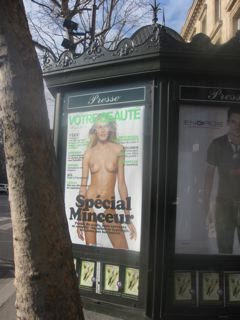 There are so many reasons I love living in Paris. The aesthetics of the place, the rich cultural heritage, the wine, the food ...

And then every now and then there's a none-too subtle reminder why the country is considered the crucible of all that is civilised in this world.

Take for example the poster that currently adorns the press kiosk on just near my house on the Place de la Republique. Ostensibly advertising a beauty magazine, it features a full frontal nude photo of a young lady -- only the words "Special Minceur" protecting what tiny shred of dignity she has left.

Quite apart from the danger a poster like this must pose to public health (the Place de la Republique is a very busy traffic thoroughfare - how many car accidents is this poster responsible for?) the fact that it is considered appropriate for an image such as this to be on public display speaks to everything I love about this country.

So she's nude. So you can see her breasts. So what? They're just breasts. Half the world has them. If the rest of us were as relaxed about the naked human form as French, imagine how much more chilled out we'd all be.

As they say here in France, vive la difference.
Posted by Bryce Corbett at 11:19 PM No comments: