Montana: where the cool kids hang 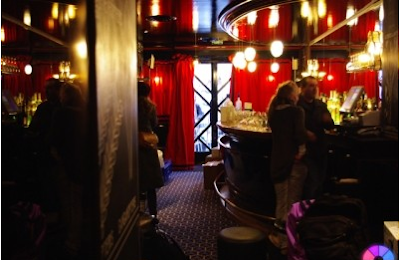 It’s not often that I get out to nightclubs nowadays. Quite apart from being a dad, and being on the wrong side of 37, I don’t much like to suffer the indignity of clearly being the oldest person in any given room.
But when a mate is about to get married, and the wife selflessly hands you a 24-hour pass out to help said mate celebrate his last days of being an unmarried man, it demands a bit of an extraordinary effort.
So it was that I found myself recently striding to the door of Montana – the newest, hippest bar/club in all of Pareeee.
Now, I’ve encountered some tough doors in my time, but nothing has ever compared to the steely reception we received when we bowled up to Montana. Tucked behind Café Flore in the otherwise preternaturally dull 6th arrondissement, Montana is guarded by a team of burly gorillas under the sway of a 16-year-old fashion victim. It took some convincing before the waif would let us pass, but once inside, we began to understand that selective door policies definitely have their benefits. Especially if you can get past them.
Montana is the latest establishment in the ever-growing stable of cool-kid haunts owned and operated by Paris graffiti artist-turned-entrepreneur, Monsieur André. He’s made a packet for himself by buying up interesting old bars and turning them into dens of beautiful-people iniquity. He launched his Paris bar empire with Le Baron, in the 8th arrondissement, a former brothel that, about four years ago became the place to see, be seen and dance ironically to hits of the 80s. 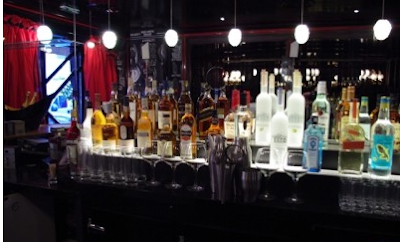 The Montana interior is textbook André – a kind of red-velvet boudoir meets punk-rock with a touch of biological textbook theme. You know, that old classic. The ground floor bar area is tiny. All the better for huddling up to the gaggle of perfectly formed folk who are either movie and TV stars or look very much like people who should be movie and TV stars (it was dark. If there was someone famous in there, I was none the wiser).
The cocktails are ludicrously expensive (20 euros a pop, excuse me?). Even a beer will set you back 12 euros. But you can still get a bottle of Moet for a comparatively reasonable 180 euros. Downstairs is where the action is. It’s a tiny space – no more than your average cave voutée (a typical, Parisian stone lined basement), expertly decorated and with just enough room for a DJ to spin a mix that segues effortlessly from Amy Winehouse to Flashdance.
To any of you beautiful young things who were there the other night and wondering who the old fella was dancing like a madman in the corner, it was I. And I thank you for your forebearance. 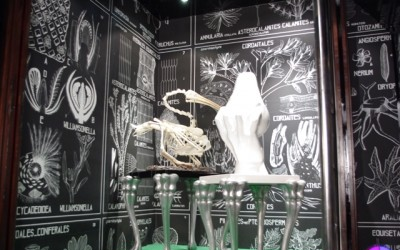 Posted by Bryce Corbett at 9:47 AM No comments: 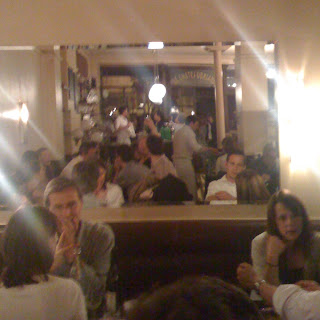 Let’s get one thing straight from the outset. I’m not a nouvelle cuisine kind of a guy. Whether it’s because I actually like to feel as though I have eaten when I go to a restaurant, or because my palate is not so refined as to appreciate the subtle flavours of half-a-parsnip with a side order of air, I’m not one to recommend restaurants where style is more important than substance. Which is why it surprises even me that I can call myself a hand-on-heart, card-carrying member of the Chateaubriand fan-club.
Ever since this unassuming eatery set up shop in Paris’ relatively non-descript Goncourt quartier, it’s been on the receiving end of all sorts of good press. If you gave the place nothing but a cursory glance, you’d be forgiven for thinking the lavish praise heaped on the resto has been largely due to the stylish art deco interior and an employment policy of only engaging dark-haired, slightly scruffy, intensely Latin-looking waiters with five day growth. People seem to like a pout with their Paris eating experience – go figure. But get yourself a table at Chateaubriand, as I did on Friday night with a group of friends, and you soon discover that this is one Parisian bistro a la mode which is not simply floating along on a cloud of mousse, jus and undue hype. Or, to mix metaphors completely, this particular Emperor definitely has clothes. 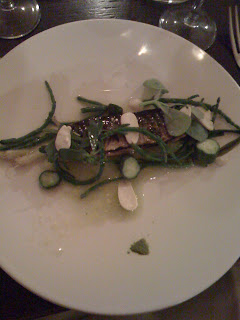 Each Friday night, chef Inaki Aizpitarte presents a set menu that simultaneously pays homage to his Basque roots while hinting at his bold sense of gastronomical adventure. There’s no choice. If you want to eat at the restaurant, you get what you’re given. Basta. It’s a bold business strategy, and, given there was standing room only in the room on Friday, one that appears to be working.
For 45 euros per person we were treated to a five course “taster meal”. The menu is prepared so that each dish finely complements the next one, and builds in a pleasant palate crescendo. We started with an amuse-bouche, which, to be honest, left me cold. A few cubes of sardine, some finely sliced radish, a few other shavings of similarly raw legumes and a cold jus of some description. It wasn’t the most promising harbinger of things to come, but nor was it offensive. I’m prepared to give Inaki the benefit of the doubt and say my palate isn’t sufficiently sophisticate to appreciate whatever he was trying to do with the amuse bouche. 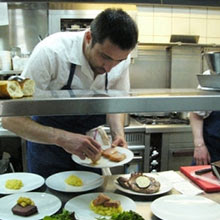 Things started looking up when the next course arrived. Described on the menu as “mackerel, green vegetables, cucumber water” (whatever that may be), it was delicious. Not least because of the “salicorne” – a type of seagrass – the raw cornichons and almonds with which it was served. Next came the “lotillon au foin, carottes” a finely balanced dish of white fish and fresh vegetables. I love a bit of lotte in my life – it’s a fish with a fantastic texture, cooked to airy perfection by Mr Aizpitarte & Co. (forgive me if I , keep gratuitously keep dropping his name into this blog entry – I just find Basque names with their x’s and z’s and general unpronuncability brilliant). Easily my favourite dish of the evening was the pigeon (and there’s a phrase I never thought I’d utter). We were gravely informed at the start of the meal that the pigeons were sourced direct from the (apparently) reputable pigeon farmer, “Paul Renault”. I’ve no idea who Paul Renault is, but his name was whispered with such reverence by our waiter, I can only assume he is the king of pigeon farmers. Though I can’t help but speculate the provenance of the pigeons was emphasised lest any of us clearly uncouth diners worried Mr Aizpitarte had spent a profitable couple of hours pigeon collecting down at the Pompidou Centre or Les Halles. Wherever the pigeons came from, they were extraordinarily good. Served with finely sliced beetroot, a bitter radicchio-type leaf vegetable and cranberries, it was melt-in-the-mouth good.
Things went a little downhill in the dessert department, when a promising-sounding “fraises chantilly” came out as a bowl of strawberries swimming in cream. I guess it was nothing less than what was advertised, but it seemed a kind of clumsy, heavy exclamation point on which to end an otherwise delicately balanced meal.
Overall, an excellent meal. And one that even managed to sate the Showgirl’s impressive apetite. And believe me, in the words of Bananarama, that’s really saying something.
Posted by Bryce Corbett at 10:44 PM No comments: 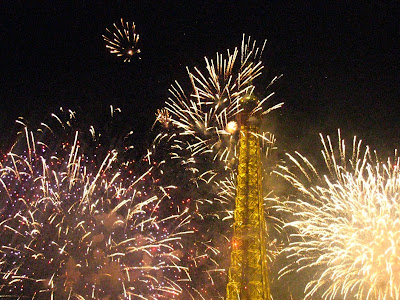 You've got to hand it to the Frogs. They sure know how to put on a show.
It was Bastille Day in Paris this week and the city once again threw itself into an uncharacteristic frenzy of celebration and happiness.
Proceedings began - as they traditionally do - on the Monday night (the 13th) when the collective forces of the French fire fighting
The Showgirl and I had the good fortune to be invited to a friend's home in the Australian Embassy to watch the traditional Bastille Day fireworks. As luck would have it, the Embassy looks directly over the Eiffel Tower. We're talking so close you can almost see the whites of the eyes of people as they go up in the elevators.
And so we stood, champagne in hand, and watched god only knows how much of our taxes explode in a kaleidoscope of colours against the backdrop of the world's most famous landmark and the world's most beautiful city.
That it also happened to five years to the day that the Showgirl and I had met, also at the Australian Embassy at a function for the Ambassador, only made it all the more special.
Though I still think the best bit about the entire night was the fact we didn't have to sit through the Johnny bloody Halliday concert on the Champs de Mars to see the fireworks. I mean, what does it say about the state of contemporary music in France that a man who dominated the music charts 1960 is still top of the pops in 2009? 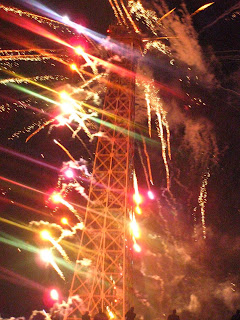 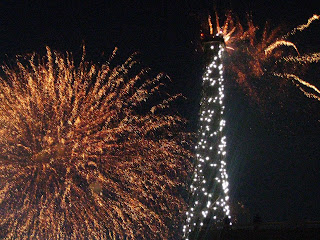 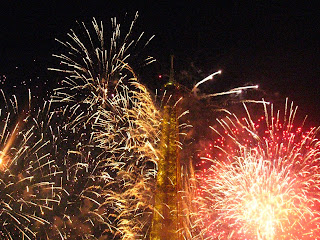 Posted by Bryce Corbett at 10:23 PM No comments: 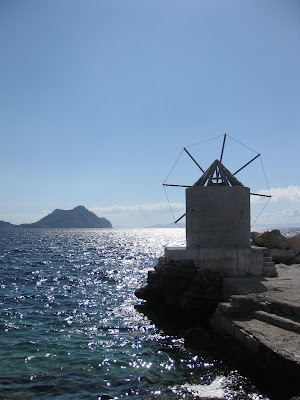 Faithful bloggettes. Sincere apologies for the radio silence. La famille et moi have been gallivanting around the European continent - variously taking advantage of early summer cheap deals and attending weddings of friends.
The last week of June saw la famille Corbay disappear on our very own Greek odyssey. After ten years in France, and more Euro mini-breaks than you can poke an Easyjet at, neither the Showgirl nor I had ever been to Greece.
And so we packed up the Little Big Man and trundled south. Our ultimate destination was the idyllic island of Amorgos, in the Cyclades. But we couldn't pass through Athens and not stop to doff our cap at the Akropolis.
Athens is a dive of a city. A baking hot concrete jungle, from which we couldn't wait to escape. We did the Parthenon - which might have been a spiritual experience were it not for the millions of cruise ship tourists with whom we walked the hallowed mount and the almost complete lack of infrastructure that the Greeks, in their infinite wisdom, have decided to create around what must be one of the world's most famous tourist sites. I can only assume they have purposefully gone for the pared-back, untouched look - to add a touch of authenticity to the experience. You've got to admire a city that invites the world to come and see one of the wonders of the ancient world but then cannot be bothered to put even a fence or walkway around it.
But I digress.
We then spent a glorious week of sun-worshipping on the beautiful little island of Amorgos. Perched out on the eastern fringe of the Cyclades, Amorgos is hard to get to, but defnitely worth the journey. It was the setting of the Luc Besson film, The Big Blue (or Le Grand Bleu) and exceeded all expectations. We ate like kings, we swam, we slept, we read and I wrote. Lots. The locals could not have been more welcoming. I can highly recommend it. And if it's a comfy hotel you are looking for, with all mod-cons you cannot go past the Yperia Hotel, in the port town of Aegiali. Ask for Adonis, and tell him Bryce sent you. 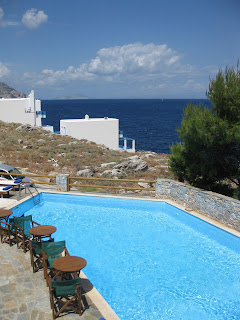 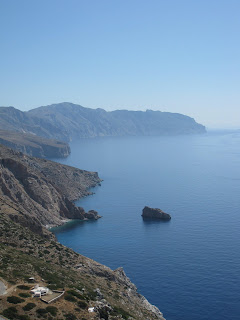 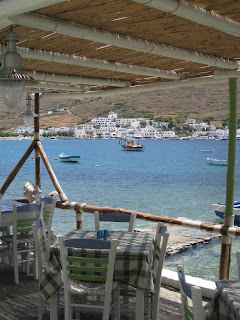 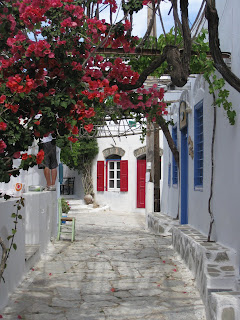 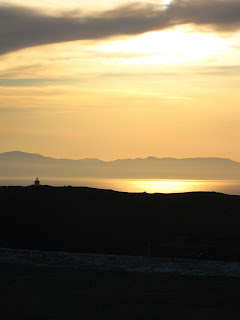