Spring-ing into another Beaujolais Nouveau 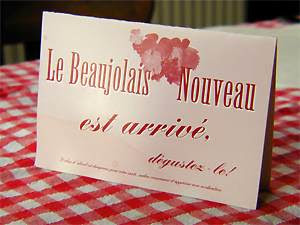 There's so much to like about my new quartier. The Louvre and its most famous tenant, Ms M. Lisa, being my new next-door neighbours (she's as quiet as a mouse, and as demure as you like), the Seine and its soul-soothing qualities being but a hop, skip and jump away, and the profusion of great restaurants, cafes and food havens that happily call this arrondissement home.
Last night was Beaujolais Nouveau night in Paris. It's the night for all the wine makers in Beaujolais to foist the fruits of their 2009 harvest on unsuspecting Parisian palates. On BN nights of yore (for, in ten years here in Paris, I've had more than my fair share of Beaujolais Nouveau), I've been so overcome with bonhomie and a feeling of goodwill to all men (a state my wife commonly refers to as "offensive drunkenness") that I've barely been able to recall my exploits.
Last night however, I remained relatively sober - the better to be able to relate my adventures last night in the quartier.
The much-celebrated Paris-based Chicago foodie, Daniel Rose, has gone and opened a new epicerie across the street from me (there goes the neighbourhood). It's a spin-off from his wildly successful 9th arrondissement eatery, Spring.
Spring - The Epicerie, had its grand opening last night. Well, as grand as a 50m2 space can pull off. There were food and wine lovers spilling out onto the pavement as everyone happily tucked into the free booze to wish Daniel well on his latest venture. The Epicerie - packed to its freshly-painted rafters will all manner of delicious, distinctly artisanal French foodstuffs - is but a taster of things to come in the I-Should-Be-So-Lucky 1st arrondissement. Sometime next year, Spring Mach II will be opening on the nearby Rue Bailleul. Le tout Paris' tastebuds are quivering in anticipation...
Mr Rose cut a cool figure last night, reclining on the stairs of his new venture, resplendant in a ye olde epicier blue coverall, while Paris's fooderati flapped about him.
Once we had toasted the Rose, our party headed across the street to the trusty ol' Le Garde Robe wine bar for a bit more BN guzzling. The wines on offer from the makeshift kerb-side counter were excellent - defying ten years worth of experience with BNs which were, in retrospect, undrinkable.
Across the street, O Chateau's Olivier was welcoming crowds of wine enthusiasts to his subterranean wine tasting emporium. If you're in the market for a crash course in French wines, this is the man to see.
With our stomachs swilling with BN, it was decided nothing would sate our hunger like a session at Chez Denise. Somewhat full from the bread and saucisson I'd been munching at Le Garde Robe, I sat at our table, with its red-and-white checked tablecloth - and scanned the menu for something 'light'. I may as well have been looking for something non-fattening in a patisserie. Chez Denise is renowned for its meaty menu. Meals come in three varieties: meaty, extra-meaty and heart-stopping. My initial instinct was to go with Coq Au Vin - the closest thing on the menu to a salad. But when one of my dinner companions asked if I would share a cote de boeuf, I heard the words "I'd love to" spilling from my lips. I blame the wine.
The steak was delicious, the frites were sinfully good and the BN just kept flowing. Not even the sight of a few ample-bellied, red-faced, extra-large human heart-attacks at nearby tables was enough to put us off our feast. We were in the throes of a BN bacchanalia - what's a few hardened arteries between friends?

Below: Daniel Rose in epicier mode 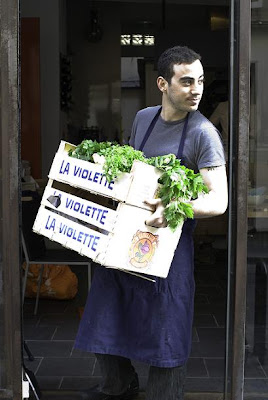