McDonalds' at the Louvre? It's a tempete in a teacup 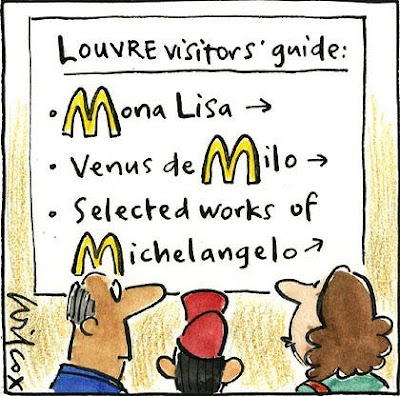 So McDonald's have announced plans to open an outlet in the Caroussel du Louvre, the shopping mall underneath the world's most famous temple of art and culture. Quelle horreur!
If the world's press is to be believed, the French are up in arms at the prospect of le Big Mac fighting for floor space with Caravaggio and Da Vinci. According to reports in newspapers all over the world today, les francais are set to take to the streets to stop this most heinous development from taking place.
Which strikes me as rather odd.
France is the second biggest market for McDonald's outside the grand ol' US of A. According to the CEO of Maccas in France, "les restos McDo" (as they are affectionately known here in France) open at a faster rate in la belle France than in any other country in Europe, and the McDonald's store on the Champs Elysées is the most profitable outlet of the hamburger and fry empire in the entire world.
Now, I'm no great fan of the Golden Arches. I find their food frankly hideous and would rather eat cow dung than feat on a McValue Meal (unless of course I have a hideous hangover, in which case, all bets are off). But I can't help but think this apparent mass-outrage on the part of the French - as represented in the international media - is a little exaggerated.
When it comes to fast-food, the French are voting with their hip-pockets. Dominos Pizza sells more than 12 million pizzas in France every year. France is the second biggest market for take away pizza after the US.
As Mike Steinberger, author of the recently published "Au Revoir To All That: Food, Wine And The End Of France" points out, the reality of French eating habits sits at odds with the perception of a nation obssessed with food and one that only sups on the finest produce, lovingly prepared according to time-honoured traditions.
I can only speak from experience. Yes, the French eat exceedingly well. Yes, the French are obsessed with food in a way few other nations are (which is undoubtedly one of the great delights of living here) and yes, on balance, the French - collectively - have a much better diet and much healthier eating habits than people in most other Western countries (a combination of readily available, excellent fresh produce, a disinclination to eat processed foods and a healthy lifestyle marked by three meals a day with no snacking in between). But to believe that France and the French are immune to the fast food scourge that is sweeping the world would be simply naive. That's the funny thing about globalization - it has a nasty habit of being, well, global.
As for McDonald's at the Caroussel du Louvre, it's perhaps worth pointing out that the Maccas in question will take its place next to a raft of other fast-food outlets which have been operating under the Mona Lisa for years. Pizza, pasta, salad bars, doner kebabs compete for the tastebuds and wallets of the thousands of tourists who pass through there every year - there's even an all-you-can-eat Chinese buffet. The Caroussel du Louvre itself is a hopped-up shopping mall - about as tacky a place in central Paris as it is possible for there to be, stuffed to its gills with Swatch stores, Tie Racks and souvenir stalls. If Maccas is going to be situated anywhere near the Louvre, it really couldn't be in better company.
(Cartoon credit: Cathy Wilcox - via the Brisbane Times)
Posted by Bryce Corbett at 9:36 AM

I read that the French like MickeyD's because they prefer a hot sandwich to a cold one at lunch. But knowing that the French do not like to eat with their hands(Quelle Horreur!), I'm curious how they eat the hamburgers and french fries??

I agree 100% that the Caroussel du Louvre is already such a commercial venue that it doesn't really matter about the caliber of the fast food there.

My reaction of shock was more about branding and affiliation. Two institutions, two huge worldwide reputations, which are polar opposites. It's a big coup for McDonald's, but not so great for the Louvre, in my book.

Just another indication that France's worldwide gastronomical status is going down the tube. Fast food or not, mediocre meals in Paris are becoming too commonplace and they are compromising their heritage and cultural values in allowing the Mcdonaldization to take over.