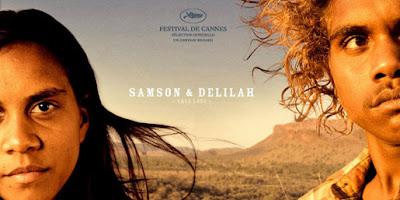 As an Australian in Paris, I'm about as far removed from my sunburnt homeland as it is geographically possible to be. But that doesn't mean the heart-strings don't occasionally twang for the wide brown land. Bouts of nostalgia for Australia come in regular waves (more regular, in fact, the longer I live here in Paris) - and there's often nothing I like better than to take a break from all this European refinement and haute culture and lose myself in the raw, unwieldy, unchecked majesty of my sprawling country of birth.
One such bout of nostalgia sent me off to a cinema on the Left Bank last week to see a press screening of the Australian film, Samson & Delilah. And while it would be difficult to describe the experience as uplifting, I challenge anyone to go and watch this excellent film and not come away having been moved by it.
It's a simple, yet powerful tale, masterfully told. First time writer/director, Warwick Thornton follows the film's two protagonists, a pair of Aboriginal kids living in a run-down community in Central Australia. Against a backdrop of neglect, a most unlikely love story plays out - one that speaks as much to the resilience of Australia's Aborigines as it does to the casual cruelty with which they are forced to live everyday.
The portrait painted of modern Australia and its relationship (or, rather lack thereof) with its indigenous people is shocking. You feel the sense of hopelessness with which these kids confront their futures - lives stunted even before they have had a chance to begin. And yet, and yet - Thornton doesn't let the credits roll without offering up a glimmer of hope.
The performances are inspired - especially that turned in by Delilah (Marissa Gibson). You can count the lines of dialogue on one hand. In this film, the power lies very definitely in what is not said. And the cinematography is sumptious, making it a well-deserved recipient of the Camera d'Or at this year's Cannes Film Festival.
The film's designer, Daran Fulham (of Syriana and Blood Diamond fame) deserves a special shout out for creating an on-screen ambience you can practically smell and feel. The grit practically falls off the silver screen.
It will be interesting to see how this film plays to French audiences. Paris movie-goers are famous cinephiles, so there's little doubt it will be lapped up for its many cinematic virtues. The French are also unusually interested in the plight of Australia's Aborigines. Many is the time I have been quizzed by locals interested in the Aboriginal story. If the French media dedicate any air time or column space at all to Australia, it is more often than not to explore the Aboriginal predicament. Samson & Delilah will doubtless go some way to feeding that fascination.
You can always tell you've been to a good film if it haunts you for days afterwards. Samson & Delilah has enormous haunt potential. And while it may not be the kind of film to make an ex-pat Aussie like me hanker for the homeland, it is a vital story, expertly told - and a movie to make this Australian proud of the talented folk his country has a happy habit of producing.
Posted by Bryce Corbett at 3:34 PM

Karin B (Looking for Ballast) said...

I've been popping around the web, trying to get a Paris post of my own done on my blog, and I was on David Lebovitz's site where I linked to and just read your review of The Sweet Life in Paris. I then came to this top post and WOW! That sounds like a good, if totally depressing film, lol. My boyfriend and I are huge movie-goers (have a UGC Pass Illimité and everything...) so if I see this one out at one of the UGC or MK2 theaters, I will bug him to take us to it (he's the passholder!).

I like your blog! And your book sounds very amusing. I am on a roll with reading Paris memoirs right now & is why I was looking up info on David's book. When I am out and about, probably at WH Smith's or Shakespeare and Co. I will keep an eye our for yours, too. *marking you in Google Reader now* :)

Hi Karin -- Welcome to the blog. All roads in Paris lead to David Lebovitz -- and happily a few of the off-shoots occasionally lead to me.
The blog is very much a work in progress. Something I am working on in between the new book, the day job and the rearing of an 18-month old.
My book is indeed available at WH Smith and at Shakespeare & Co. - I'm sure it would be delighted to be purchased by you.
Bryce

Karin B (Looking for Ballast) said...

LOL!! No kidding! :) "All roads in Paris lead to David Lebovitz -- and happily a few of the off-shoots occasionally lead to me. :D he seems like a really wonderful and decent human being,so I am glad for him! And I am glad you have a connection to him as well. I've gotten a few hits on my own blog by leaving comments on his, too. It's a really nice example of good karma in action, I like to think, lol.

You certainly have your hands completely full! Best as you juggle and I will be back again. :)