Writers At The Residence - a night at the British Embassy 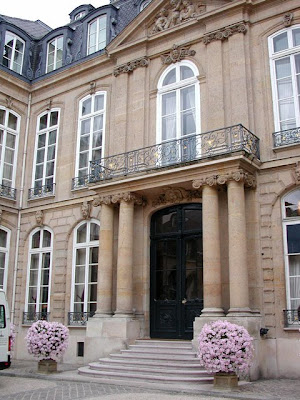 Greetings Bloggettes.
Firstly, apologies for the infrequent nature of these postings. I am working feverishly to complete the manuscript of book two, am working to meet a fast-approaching deadline, and hence haven't had time to blog. My humblest apologies.
I tend to go into a bit of a tunnel when I am in writing mode. I put the blinkers on, turn off the phone, disconnect the internet, desist from looking at email or Twitter - and just try to focus.
I did surface briefly last night, however, to participate in a charity fundraiser at the British Embassy here in Paris. It was such a good night and for such a good cause, that I have even broken my self-imposed blog embargo to share a little bit of it with y'all.
I was part of a panel of Paris-based authors for an event at the UK Embassy called Writers At The Residence. Organised by UK Ambassadress, Lady Westmacott, to raise funds for the excellent local charity organisation, SOS Helpline, the event also featured fellow scribblers Heather Stimmler-Hall (Naughty Paris Guide), Alex Lobrano (Hungry for Paris), Stephen Clarke (A Year In The Merde), Charles Timoney (A Certain Je Ne Sais Quoi) and Michael Sadler (An Englishman Amoreux).
Before an attentive, generous audience of some 200 British, American and Australian expats in Paris (plus a handful of indulgent French) - and in a room of the Embassy that re-defined the meaning of the word "sumptuous" - the panel members (yours truly included) yammered on for an hour or so about French stereotypes, the worldwide fascination with France and the state of the French food industry.
From Heather we learned the French reputation as excellent lovers was not always deserved (she tactfully declined to reveal how she knew this), from Alex we gleaned that France is still the world capital of inventive, innovative cuisine, from Charles we learned how his French colleagues gather at his office door at 5pm every day in anticipation of him "taking tea" (as all good Englishmen should), from Stephen we heard how proud his mother was that the French word for "pooh" had become his trademark and from Michael we were treated to the spectacle of an old-school raconteur in full flight.
A rollicking good time appeared to be had by all (at least from where I was sitting), plenty of money was raised for the SOS Helpline and no-one got hurt (except, perhaps, for the collective dignity and pride of the French nation, so insistent were the parries and thrusts from those of us who make a buck poking fun at or otherwise highlighting the apparent absurdity of some of their quirkier habits).
Heather was moved to remark after the event that the six of us ought to take our show on the road. So there it is people: we're available for hire. Weddings, parties, bat mitzvahs..
Posted by Bryce Corbett at 3:12 PM

Bryce,
Loved your book and was trying to buy another copy for the ex french expat man in my life. Four book stores in Perth, Aus. were all out of stock (one had it on order). Will order from Amazon now, but thought I'd let you know...in case there is something you or your publisher can do to put the pressure on bookstores.

Hi Anonymous -
Thanks for letting me know. I will pass the info on to my publishers. How dare they not have every bookstore in the Western world stocked to the rafters with copies of my tome. Heads will roll!
Glad you enjoyed the book - am hard at work on book two. Coming soon to a bookstore near you ... hopefully.

congratulations! To be in the same category as stephen clarke, well then, you must be quite the author.. i saw your book in abbeys, town hall, sydney the other day =]